Are You At Risk?

Legionnaires' disease is caused by the bacterium Legionella pneumophila, which lives and breeds in natural water sources such as rivers, lakes and reservoirs and also in domestic water systems. It is a pulmonary infection that targets the lungs and is transmitted to humans via inhalation of aerosolized water contaminated with the bacteria. Any domestic water system that creates an aerosol droplet (water suspended in air) can potentially be at risk of harbouring the bacteria and spreading the disease.

Legionnaires' disease acquired its name in July 1976, when an outbreak of pneumonia occurred among the delegates of a convention of the American Legion at the Bellevue-Stratford Hotel in Philadelphia.

In Europe around 7,000 cases of Legionnaires’ disease were reported in 2015, more than 400 of these cases were identified in the UK, with approximately 7% of these resulting in fatalities.*

Areas of high risk due to the generation of aerosol droplets of water suspended in air include cooling towers, domestic hot water services (DHWS), showers, taps and whirlpool spa baths. Legionella is also found in untreated surface waters, is not always removed by conventional water treatment processes and can easily colonise environments such as hot and cold water distribution systems. In these systems, Legionella is able to flourish at temperatures between 20°C and 45°C, especially where dirt, scale or biofilms are present. The bacteria can survive under a wide variety of environmental conditions. The organisms are dormant below 20°C and will not survive above 60°C, but grow most prolifically at about 37°C.

The majority of reported outbreaks of Legionnaire's Disease are from Domestic Hot Water Systems. The following applications are high risk as they create aerosol droplets. 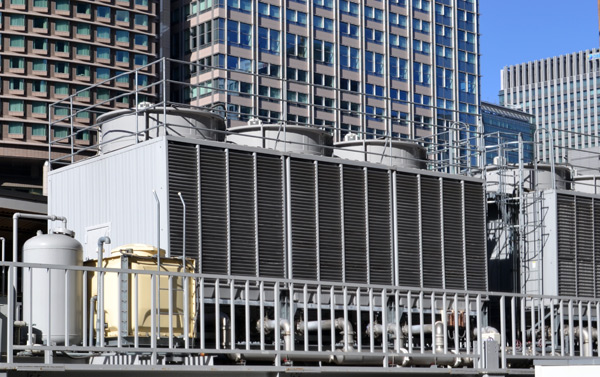 The disease is particularly associated with hotels, fountains, cruise ships and hospitals with complex potable water and cooling systems.

The Health & Safety at Work Act (HSWA) 1974 and Control of Substances Hazardous to Health Regulations (COSHH) 1999 have identified the risk of legionella. Find more information at hse.gov.uk

Legionella can be controlled by either physical (Thermally or by UV/Ozone) or by chemical (Chlorine Dioxide and ionisation) means.

So How Does Thermal Disinfection Work?

Our Projects From Around The World

Every effort has been made to ensure that the information on this website is correct. Crane Ltd. assumes no responsibility or liability for typographical errors or omissions or for any misinterpretation of the information on the site and reserves the right to change without notice.
All images on Crane BS&U web sites are the exclusive property of Crane Ltd and are copyrighted and may not be reproduced, copied, transmitted or manipulated without written permission. All images shown are for illustrative purposes only, actual product may vary.
Crane BS&U has no direct influence on, or take any responsibility for any working practices employed or depicted in any image(s).